The Criminal Minds "Urban Warfare" (from the "Guilty As Charged" mini-LP) (TCM Records, 1990) 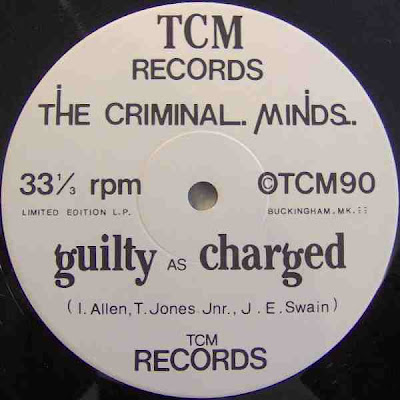 OK, this is probably the rarest record I own. I'm going to base that on the fact that I've been offered up to £500 to sell it. I've refused. ( I must be mad)

This is the first, self-produced and self-released record from legendary UK Hip-Hop crew The Criminal Minds. From 1992 onwards, they found a considerable measure of success releasing breakbeat hardcore (tunes such as "The Criminal" and "Baptised By Dub" are as definitive of the Rave era as it's possible to get.) However, when they first started, they were very much a straight hip-hop outfit. It's not to difficult to see the leap they made from hip-hop to hardcore: the BPM's sped up, the breaks were pushed to the fore, the raps pushed back a little, the scratches and samples took precedence over the production. Yet, they never lost touch with their hip-hop roots either: later tracks such as "Toxic Culture" (from the "Joyrider" EP) show they were as much influenced by The Bomb Squad as they were by any of their other Hardcore contemporaries.

But the one record by The Criminal minds that everyone seems to covet is this EP. TCM were, at the time a nascent hip-hop crew based in Buckingham, just outside Milton Keynes. At their core were two DJ's, Spatts and Halo. This mini-LP was recorded on a 4-track in Spatt's bedroom, and was financed by Spatts selling his Technics decks and pulling in favours from friends. There must have been loads of people involved in supporting the band up to this point, most of them are thanked in a special track on the second side of the LP "shout outs", and there's dozens of them! Despite the fact it was recorded on comparatively primitive equipment, the tracks are incredibly powerful, and intricately constructed. The scratching is razor-sharp, the beats crisp, the rapping febrile and full of energy. "Guilty As Charged" (AFAIK) remains a "Holy Grail" for collectors of early UK hip-hop, as it functions as a perfect snapshot of the development of hip-hop in this country at the time. This is what it was like. 500 copies were pressed, with most being sold privately to friends. Few made it into shops. I love this tune to bits (that bit where the Star Wars sample comes in - just PERFECT!) and won't be parted from it. Please don't ask me to post up the rest of this EP, you're just getting this one tune. Hope that's OK. Enjoy.

Absolutely treemendo, sir! Love how it's got that grimy, early Ultramag feel to the production and the flow, just like so much UK stuff from that period, but it still has a unique flavour of its own. Can't believe I ever missed this.

F*ck ,e you're back. 'Bout time too. Don't let it be 9 months before another post.

thought you have gone for good. love to hear back at last.

your blog is great. good to see you again.

It was me that sold my decks, not Spatts! Don't steal my thunder man! (tongue firmly in cheek).

Very nice to read and reminisce. Thanks my man.

Hobbies plays a key role for the people who really came to the earth for this purpose, one or the other day people around the world would be discussing about the people who have collected Many World Coins,monuments, old stamps, old notes who will be positioned in the world of Guinness records.aste

Halo may have sold his decks, but Spatts worked in Newport Pagnell services to whilst it was recorded. Hi Tone by the way.

Hi Iain, so you're a blogger now! I remember the good old days of the 'real' XFM when they played decent stuff, not Capital Radio with a few indie rcords thrown in ;)

Did you post Age of Chance's Kiss once upon a time? iF you have it, could you re-upload it again? Many thanks, and er... carry on!

Hello people want to express my satisfaction with this blog very creative and I really like the views of the focus very good indeed Thank you for the helpful information. I hope you keep up the good work on making your blog a success!

I just found your blog, and i just love it!
The track is epic, too bad i can't find any info about them on wikipedia or somthing.

You must be a very busy person, it amazes me how much time you put in this blog.

That is very good comment you shared.Thank you so much chat that for you shared those things with us.Im wishing you to carry chat sohbet on with ur achivments.All the best.

Hi, I came across your site and wasn’t able to get an email address to contact you. Would you please consider adding a link to my website on your page. Please email me back and we'll talk about it.

Hello I enjoyed yoiur article. I think you have some good ideas and everytime i learn something new i dont think it will ever stop always new info , Thanks for all of your hard work!.

A very nice page. I think the effort has passed, we have to thank you:))
Dis estetiği

Hi,
I have seen your Blog..It’s too informative. There are many posts which are really too Good and very useful.

Hi, Nice post thanks for sharing. Would you please consider adding a link to my website on your page. Please email me back.

Nice post, thank you for sharing. You have really imparted useful knowledge. A very useful post I must say. Awesome content. I bookmarked it for future reference.

Thanks and keep posting such an informative blog.

Everyone dreams of having his own house. If you too want to have your own house, read this blog where you will find tips to help you find your dream house.

I have heard about these problems in corporate websites, Offshore Software development might help you to deal with them.

Thanks for this. I really like what you’ve posted here and wish you the best of luck. To get any information about
Godrej Woods Noida
Godrej Golf Links
Green Homes
Godrej Projects in Noida
Godrej Properties Noida
please contact us @ 9599384876